We approach this work through the lens of capturing motion. Transit stations are places of constant motion and change in ways that are highly visible to the observer. We propose a project that captures this sense of motion and uses its physical characteristics as a way to make that motion felt on the site. The built environment, although it appears static, is in a constant state of movement as it shifts to accommodate fluctuating temperatures, wind and precipitation. This piece accepts these changes and in fact uses them to create a constantly shifting presence in the urban landscape.

Biormorph abstracts and embeds the signatures of the site users (human and non-human) into the surface of the canopy. As a proposal for the Muttart stop of Edmonton’s new Valley Ridge LRT line, its reference to vaguely human and animal forms in motion visually activates the canopy of the building. The pattern compresses and overlays the built up index of the activities and movement patterns of the site and functions as fossil of its history. Seasonal precipitation in the form of rain and snow and the changing light qualities of the Alberta landscape interact with the piece to form new patterns readings of the work. The changing aspects of the piece also reference the plant collections of the Muttart, which are always in states of change. 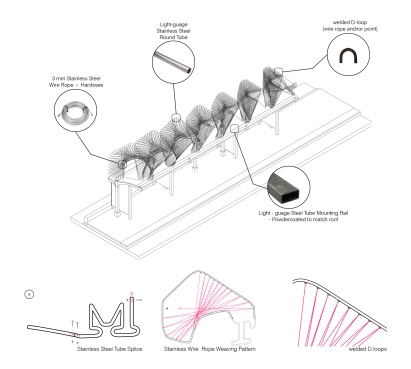